Shut Up And Listen 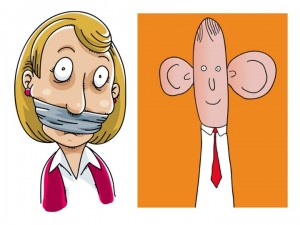 Italian entrepreneur coach Ernesto Sirolli gives this advice to leaders: “Want to help someone? Shut up and listen.” That was the title of his 2012 talk at a TEDx conference in New Zealand.

To illustrate, he shared a story about a failed attempt to help Zambian farmers. The farmers were actually shepherds—growing nothing—in a valley with good soil and sufficient rain to grow crops that could upgrade their standard of living significantly.

The locals showed little interest in planting crops, so eventually Sirolli’s team planted and grew tomatoes for them, to demonstrate the potential. The tomatoes did well and the team expected the Zambians to enthusiastically follow suit. They didn’t.

The reason became clear when the hippos from a nearby river decided the tomato plants would make a great salad and made a night raid on the field, leaving nothing but…well, you know what hippos leave behind.

The Zambians were not surprised and probably amused. After all, they knew what would happen to any crops planted in the valley. When Sirolli’s team asked why they had not been warned, the villagers’ response was: “You didn’t ask.”

I think the story makes the point without any amplification on my part. So I think I’ll just shut up and listen to your comments about this post. Maybe I’ll learn something.

She Walked Out On Me 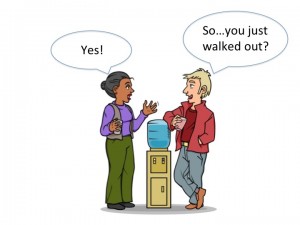 She asked to see me, but when she came in I wasn’t really paying attention. I had some papers in my hands and my computer beeped with an email. My eyes went to the screen and the papers sent a “make this quick” message to her. After several minutes, she got up and headed for the door.

“Where are you going?”

Then she disappeared down the hall.

Sadly, this is a true story—not one of my finest hours as a leader. The lady was one of the two or three best employees I ever had and she deserved a lot more respect than I was giving her that day. So another Hard Lesson went into the file to be remembered.

It has happened at home as well. I have learned—with too frequent relapses—that turning the TV sound off or putting down the paper makes a big difference in whether Dottie feels respected and valued or not. Another important part of respectful listening is eye contact. Roaming eyes give the appearance of inattention even when you are actually listening.

Listening is the most important tool in your communication toolbox. So remember:

Thanks, Diane, for teaching me a lesson when I needed it. It has been 20 years or so and I still remember.

…listening is probably our greatest opportunity to give attention to others on a daily basis and convey how much we value them. — James C. Hunter

There are four reasons why listening is so important.

First, listening shows respect. When eye-to-eye with no distractions, it is one of the best gifts you can give to a team member, or your spouse. (Dottie made it clear to me that I could improve on this.)

Second, listening reveals humility. Especially in the work environment, it lets your team know you don’t think you have all the answers.

Third, listening promotes involvement. Giving everyone a voice gets more ideas on the table—some may be the breakthrough ideas you need.

Finally, listening is smart. After all, you might learn something.

Of course, I’m talking about genuine listening, not just letting people talk to make a show of it.

Need to raise the level of your leadership? (For all of us the answer is “yes.”) Become a great listener.

Leadership Lessons From The Battle Of Franklin

Yesterday, November 30th, was the 145th anniversary of the Battle of Franklin—“one of the worst disasters of the war” (Wikipedia).

In a series of frontal assaults—over a period of about five hours—against strongly entrenched Union forces, the Army of Tennessee was repeatedly thrown back with devastating losses. When the day ended, there were more than 6000 Confederate casualties including 1750 dead. Fifteen Confederate generals were lost (five killed in action, one mortally wounded, eight wounded and one captured). The Army of Tennessee was finished as an effective fighting force for the remainder of the war.

There are many hard leadership lessons we can learn from the story of the battle of Franklin that apply to leaders today.

Opportunities Lost: the real opportunity to engage and defeat the Union army was one day earlier. But the exposed, vulnerable and out-numbered Union army escaped from Columbia through Spring Hill during the night and spent all day on the 30th digging in. Yesterday’s opportunity may be gone today.

Clear Communication: the Union army was not confronted at Columbia or Spring Hill because of conflicting and confusing communication between and among the Confederate generals. You cannot spend too much time making sure that all of your organization is getting the message—clearly, consistently, and continuously.

Defining Reality: when the order was given to attack, the Union forces had spent ten hours getting ready. Plus, they had the huge advantage of having 16- and 7-shot rifles and artillery support. The Confederates had no artillery support and single shot rifles. Facts are your friends and ignoring them can lead to disaster.

Listening: Lt. General John Bell Hood was the commanding general of the Confederate army. He ordered the assaults “over the strong objections of his top generals” (Wikipedia). Proverbs 20:18 (NASB) says, “Prepare plans by consultation, and make war by wise guidance.” It is almost always a mistake to ignore input you get from your front line leaders.

Good Judgment: No one would ever question the courage of General Hood. He had led frontal assaults himself; had lost his right leg to amputation and his left arm was permanently damaged and useless. Some would defend him saying he had the courage to make a “hard call.” Courage is not the same thing as good judgment.

Fitness To Lead: General Hood’s fitness to lead was questionable. He lived with constant pain; his temperament was described as brash and reckless; and at Franklin he was making decisions out of anger. Leadership is a job, not a position. Jobs are hard. Leaders need to be physically, emotionally and spiritually fit to lead. Are you?