I had a communication failure with my grandsons this morning. While watching a thrilling (?) episode of SpongeBob SquarePants (sic), SpongeBob was attacked by an evil gang called the Bubble Poppin Boys. Fortunately, SpongeBob escaped in a bubble (they failed to “pop it”), defeated the evil Bubble Poppin Boys, and was declared a hero by the town citizens for freeing them from the evil bubble popping terrorists. That’s the back story.

Now for the communication failure: while watching this contest of good versus evil, I commented that the Bubble Poppin Boys reminded me of the Jesse James gang. My 13-year-old grandson, Aaron, asked, “Who’s Jesse James?” “Who’s Jesse James?” Are you kidding me? What are they teaching in history classes these days? How could any well-educated 8th grader not know about the train-robbing railroad terrorist of the late 19th century? 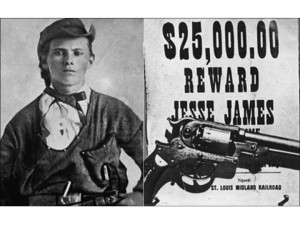 There’s a communication hard lesson in this story. All of us want our communication to be clear (clarity is the buzzword), but it is only clear if the context is understood and it is compatible with the culture. I grew up in a 1950’s Oklahoma culture: cowboys vs. Indians, and good guys vs. bad guys (the bad guys went to jail and the good guys got the girl). The last time Jesse James was part of our culture was when Cher sang “Just Like Jesse James” back in the late 80’s: “Tonight I’m gonna take you in dead or alive.” (I doubt if Aaron knows who Cher is.)

Aaron has grown up in a Legos, Pixar, super-hero, video-game culture. His villains are the Joker, Darth Maul, Lord Voldemort, etc., not Jesse James. Note to self: “Dick, it’s 2015, not 1965. Communicate accordingly—with Aaron and everyone else.”