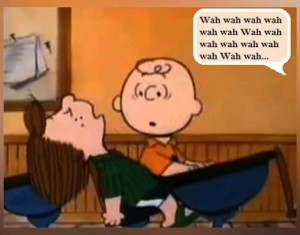 It is not unusual for adult-speak to invade the business world as well—or church world, or government world, or your world. A recent WSJ article had three great examples of a CEO speaking that was nothing more than “Wah wah wAh waH wah WAH wah.”

Example 1: “profitability framework”—meaning, we are losing money, but maybe someday we’ll make some. (Maybe…if we put an entirely new picture in a new frame.)

Example 2: “optimizing our store network”—meaning we are going to close a lot of stores. (They have already closed or sold 40% of their stores and are losing more than ever.)

Example 3: “transforming select business models”—meaning…I have no idea what this means. (Maybe, “We are hoping for a miracle.”)

Of course, you don’t have to be a CEO to lapse into adult-speak. Preachers do it. Politicians do it. Educators do it. And, gosh, I do it.