Turn The “M” Upside Down 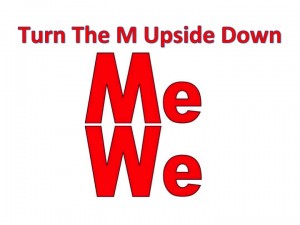 Early in my career, I learned the embarrassing way that “me” is a word that should be seldom used in most contexts. While giving a presentation to a group of government engineers, I repeatedly referred to “me” instead of “we” as having done this or that or whatever. My leader, in a moment I still remember vividly, pulled me aside and said plainly and with a bit of anger: “This will go a lot better if you use ‘we’ instead of ‘me.’ ”

If you want to raise the level of your leadership in 2016, start by turning the M upside down. Leading is not about you, it’s about the organization and the people you have the privilege of leading. “We” instead of “me” is one of the consistent characteristics of Level 5 leaders as defined by Jim Collins.

Excerpt from the Introduction to 16 Stones

In his now-classic book Good to Great, Jim Collins identifies what he calls Level 5 leaders. They have the “personal humility” and “fierce resolve” needed to transform their companies from good to great. “Level 5 leaders,” he says, “are a study in duality: modest and willful, humble and fearless.” About one of his Level 5 examples—Darwin Smith of Kimberly-Clark— Collins says he “…carried no airs of self-importance…never cultivated hero status or executive celebrity status.”

Two years after Good to Great, in a 2003 Fortune magazine article, Collins named Smith as one of “The Ten Greatest CEOs of All Time.” Wow! Top ten of all time! What did all ten have in common according to Collins?

“If one thing defines these ten giants, it was their deep sense of connectedness to the organizations they ran. Unlike CEOs who see themselves principally as members of an executive elite—an increasingly mobile club whose members measure their pay and privileges against other CEOs…. Much depended on them, but it was never about them.”

Remember the phrase “it was never about them.” Adopting it is one of the most important steps anyone can take in trying to become an authentic and effective leader.

Is Monday your first day back in 2016? Get off to a great start toward Level 5—turn the M upside down!

[16 Stones can be ordered on this website (best price for print), or at Amazon for e-book format.]