Those Daring Young Men In Their Crashing Machines 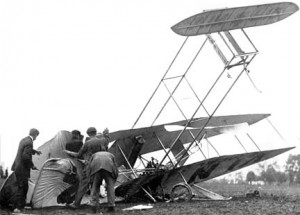 My daughter, Elizabeth, is flying on Christmas Eve to join us for our family Christmas celebration. I am glad she is coming. Christmas without Elizabeth wouldn’t be Christmas. I am glad she is flying because I won’t be worrying about her arriving safely. Commercial air travel in the U.S. is 96X safer than driving (based on equal miles). By the way, it is 4500X safer than motorcycles, so if she is expecting a Harley for Christmas, she is going to be disappointed.

It hasn’t always been that way. In the early days of aviation, flying was the realm of risk-takers. There were no rules, no FAA, and no NTSB to investigate accidents. “Have Airplane—Can Fly” was the mantra whether the airplane was built by the Wright Brothers or home-made in the barn. The planes had wood frames, canvas skins, under-powered engines, few controls, and fewer instruments. It was a white-scarf-bravado business; parachutes were for cowards. Crashes—fatal crashes—were common. In the early ‘20s, 31 of 40 postal service pilots were killed in accidents. Thousands of other daring young men (and a few women) risked—and lost all—in those barn-storming days.

Cal Rodgers was one of those daring young men. In 1911, William Randolph Hearst put up a $50,000 prize for the first pilot who could fly coast-to-coast in 30 days or less. Cal recruited some financial backers, a ground/fuel crew who traveled by train, and took to the air from Sheepshead Bay, NY on September 17 in a Wright Flyer EX. Forty-nine days later, he landed in Long Beach and taxied his plane into the surf of the Pacific Ocean with the following score card:

Breakthrough and change always fly on the backs of risk takers. If Orville and Wibur hadn’t taken a risk in 1903, Elizabeth would be driving on Christmas Eve and I would be worrying.

Not everything new that comes along is dangerous, but everything new that comes along has something at risk: failure, reputation, finances, relationships, and so on. Is your organization—or life—a bit stale and bogged down? What have you risked lately? Not much? Maybe that’s the reason. Why don’t you put something out there in 2016 that’s a bit uncomfortable—maybe even a risk? Be a Cal Rodgers! Give me a reason to write about you.