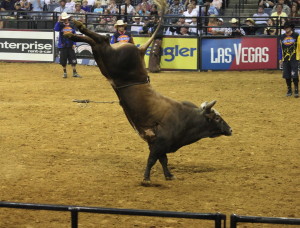 In one of the best loved children’s books of all time, Charlotte the spider immortalized Wilber the pig by spinning words like “that’s some pig” in her web. Really? A spider that could spell and spin words in a web? Yup. Charlotte was a that’s-some-spider spider while Wilbur was just an ordinary pet pig. But I suppose a pig saving a spider wouldn’t have much charm and appeal to the preschoolers who love the story.

Now, when it comes to bulls, “that’s some bull” is the true and earned description of Bushwacker—the greatest bucking bull of all time. Bushwacker is the king of bulls. He bucked off a record 42 riders in a row while compiling a current lifetime record of 67-3. The average time before the rider eats dirt is 3.3 seconds. That means Bushwacker earns about $500,000 per year for working less than one minute. (Remind you of Washington D.C.?)

“The most dangerous leadership myth is that leaders are born—that there is a genetic factor to leadership.
This myth asserts that people simply either have certain charismatic qualities or not.
That’s nonsense; in fact, the opposite is true. Leaders are made rather than born.”
Warren G. Bennis

“Leaders are made” means they work at becoming better leaders.

If you want a 67-3 leadership record, you will have to work for it. I suppose that’s why most leaders are 50-50 at best. I wish I had realized this a lot earlier in my career. I could have avoided a lot of mistakes and my company, Hard Lessons, could have a different name.

By the way, Bushwacker’s owner, Julio Moreno, describes Bushwacker’s retirement as passing the time in 15 irrigated-clover acres with about 20 girl friends to keep him company. Hmmm. Sounds better than a 55+ retirement village in Florida.