The Kitchen Is Always Hot 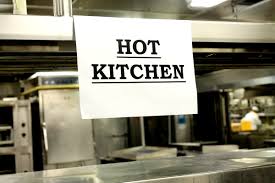 The kitchen is always hot for leaders. Leadership is not for the thin-skinned who wither every time the critics show up. If you are “in the arena” (as Pres. T. Roosevelt called it), criticism is certain. According to Greek philosopher Aristotle there is only one way to avoid it: “Criticism is something we can avoid easily by…doing nothing.” So since you are certain to be criticized, the real issue is should you respond and how to respond. Laurence J. Peter, author of The Peter Principle, said it this way: “Speak when you are angry, and you’ll make the best speech you’ll ever regret.” So go slowly and be calm.

Before taking it personally, have you taken time to correctly identify the target of the criticism?

Considering the source of the criticism, is it worth considering at all? Is it from external or internal sources?

What is the motive of the critics? Is it possible they are well-intentioned?

Rather than reject it out of hand, have you honestly examined whether it could be true or not?

If you decide you need to respond, why? Will a response accomplish anything positive, or just inflame the critics?

Whatever you do, don’t let criticism turn you into a critic.

This post is abbreviated from chapter 10 of 16 Stones. You can find order information at https://hard-lessons.com/16-stones-book/

If this post was useful and interesting, please forward it to a friend.

Not For The Thin-Skinned

Some things never change. It was about 2300 years ago when the Greek philosopher Aristotle said:

“Criticism is something we can avoid easily by…doing nothing….”

About 100 years ago, our philosopher president, Teddy Roosevelt said:

“It behooves every man to remember that the work of the critic is of altogether secondary importance, and that, in the end, progress is accomplished by the man who does things.”

If you want to avoid the critics, then do nothing and accomplish nothing. Don’t run for president. Don’t aspire to leadership in your company. Don’t make suggestions. Don’t volunteer. Don’t become a pastor or school principal. Don’t get “in the arena” (another familiar Teddy Roosevelt quote) and stay out of the kitchen. The kitchen is always hot for leaders. Leadership is not for the thin-skinned who wither every time the critics show up, and they will always show up if you are trying to do something significant. So let me make it simple for you: if you can’t handle criticism, you won’t be able to lead effectively.

Since every leadership situation is different, there is not a one size fits all formula for coping. My suggestion is to answer the following four questions as fully and honestly as you can before you respond to the critics.

Question #1:  Who or what is the target?  Criticism can be specific to the leader: “she’s a lousy CEO” or “he can’t preach worth a flip.” It can be directed at a group: “union members are lazy and overpaid” or “the engineers don’t know how to design anything we can actually build.” A project can be the target of criticism: “buying that machine is a waste of money” or “why on earth do we need a new building for the children’s ministry?” Though all criticism may feel personal, it isn’t always personal. Recognizing the target is an important first step in deciding whether to respond and how to respond.

Question #3:  What is the motive of the criticism?  Criticism can arise from damaged self-interests, wounded egos, jealousy, hurt feelings, and so on. Sometimes, it arises from well-intentioned and honest disagreement. Understanding the motive—to hurt or help—is a key part of developing your response.

Responding To Criticism  Your response will flow out of the answers to the above four questions. You may—often wisely—choose to ignore the criticism and keep working. If you choose to respond, don’t react quickly or in anger.Laurence J. Peter, author of The Peter Principle, said it this way:

“Speak when you are angry and you’ll make the best speech you’ll ever regret.”

Finally, when the sticks and stones do actually hurt, don’t let criticism turn you into a critic.