Stinking Up The Workplace 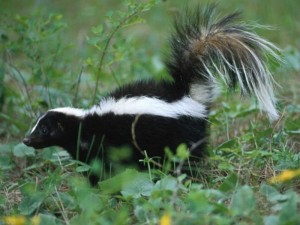 We have had an unusually cool August—highs in the 80s and lows in the 60s. On one recent night I decided to sleep with the door to our screened porch open, looking forward to some cool fresh air as I had sweet dreams. About midnight or so, a passing skunk decided to turn my sweet dreams into a smelly nightmare. After closing up the house, it was back to bed, but the foul odor lingered through the night, spoiling my cool fresh air and sweet dreams.

Gossip really stinks. That is why the Dave Ramsey organization has a rigid “no gossip” rule.

Arriving late to meetings really stinks. It is rude, sending a message that your time is more important than my time.

Talking too much really stinks. It is arrogant, sending a message that your opinion is more important than my opinion. (I was guilty of this in a Friday morning meeting.)

Laziness really stinks. If you don’t do your job, someone else will have to.

Self-focus really stinks. Your kids are cute, but they are not the cutest kids on the whole planet (my grandsons are), and not many people really want to hear a minute-by-minute account of your weekend.

If you are the leader, it is your job to keep “mercaptans” out of your workplace. Skunks aren’t easy to reform, so you may have to get rid of them.