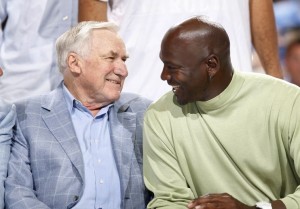 According to Merriam-Webster, finger pointing is “the act of blaming someone for a problem instead of trying to fix or solve it.” A great example of this recently occurred in NYC: “Tensions remained high in New York City Monday as lawmakers and other political figures battle over who deserves the blame for the weekend killings of two policemen shot to death indiscriminately as they sat in their patrol car” (The Hill, 12/22/2014).

I like Coach Dean Smith’s definition better. Smith wanted to make sure that the “passer” got as much credit as the “scorer,” so he started the practice of the scorer pointing at the player who made the pass. It was—and is—a combination of “thank you” and “props” that everyone can see: the players, coaches, crowd, and press.

For Smith, it was all about the team, not individuals. On flights, it was the seniors who sat in first class, not the stars; the coaches sat in the back behind all the players. When a player came off the court, Smith had all the players stand in respect whether he had played well or poorly. Smith believed that appreciation was a better motivator than berating.

Coach Smith’s death (2/7/15) prompted an out-pouring of love and respect. His greatest player ever, Michael Jordan, has this to say about him: “Players with different backgrounds, different outlooks, different potential: He seemed to be able to reach all of them the same way. If you talk to a guy who never got off the bench, he says the same thing I say. That’s what a father figure is really like—he never put one kid above the other. The love that came from him: the caring, the advice, the education, and the persistence and determination he had in pushing all his players, not just me.”

One of the challenges of leadership is blending stars and mortals into a winning team. Smith had the key: he never put one kid above the other and he appreciated the passer as much as he appreciated the scorer. So what are you going to do differently today? How about finger-pointing one of your mortals?