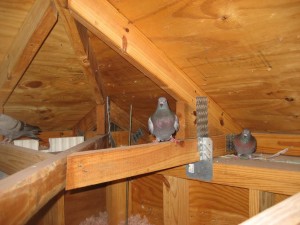 So how do you get pigeon poop out of your attic? A Wall Street Journal article reported on the futile efforts of the Select Board in a well-known town in Massachusetts (unnamed to protect the guilty). Pigeon poop had piled up in the town hall attic and become a health hazard. The Select Board budgeted $125,000 to clean up the mess, but the lowest contractor bid was more than twice that. A group of citizens volunteered to clean up the mess for nothing, but that idea was nixed by the lawyers (fearing the city would be sued). Finally someone had a brilliant idea: “If we can’t clean it up, why don’t we at least make sure it doesn’t get worse by keeping the pigeons out? We could patch their entry hole in the attic window frame.” Duh.

This true story is a great example of an organization focused on the symptoms, not the problem. There are lots of other examples:

We make the same mistake as individuals: heart patients go back to cheeseburgers soon after their quadruple bypass relieves the chest pain and golfers try to fix their swing by buying a new set of clubs (quitting would be smarter).

Why do we fall into this trap so often? Fixing symptoms is often easier and quicker than fixing the problem (but only in the short run). Once the symptoms are relieved, we move on to the next set of symptoms. Often we focus on the symptoms because we are in denial about the real problem—this is very common when the leader is the problem. Unidentified problems continue their hidden destructive work until they finally erupt into the open with sometimes fatal consequences.

Tired of relief? Want to actually fix the real problem? Do this:

If this post was interesting and useful, please forward it to a friend—or a pigeon.