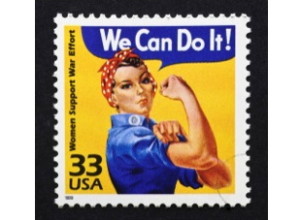 More accurately, she is a heroine: Elinor Otto is 93 years old. Yup, 93. She works a regular five-days-a-week, eight-hour shift at the Boeing plant in Long Beach—not in an office, not as a receptionist—as a riveter on the C-17 assembly line. She takes a riveting gun in hand and hammers in rivets on a military aircraft, just like she did back in 1942 during World War II. She has been riveting longer than I have been alive, and I’m 69. Amazing!

According to the LA Times (At 93, This Rosie Is Still Working by Samantha Schaefer, 9/18/2013), she “is out of bed at 4 a.m. and drives to work early to grab a coffee and a newspaper before the 6 a.m. meeting. In the Boeing lot, she parks as far from the plant as possible so she can get some exercise. Every Thursday, she brings in cookies and goes to the beauty parlor to have her hair and nails touched up after her shift ends.” According to coworker, Craig Ryba, “She’s an inspiration. She just enjoys working and enjoys life.”

In Chapter 9 (A Hard Hat For Everyone) of my book, 16 Stones, I shared my own thoughts and experience with Rosie the Riveters:
It is common today for women to work in heavy industry factories. They do all the things men do on assembly lines, in machine    shops, in quality labs, and stockrooms. But that hasn’t always been the case. It started during World War II when the men were off fighting, and workers were needed to produce airplanes, tanks, rifles, jeeps, and bullets. Women stepped up and were immortalized in a hit song, “Rosie the Riveter”:
All the day long, whether rain or shine, she’s part of the assembly line.
She’s making history, working for victory, Rosie the Riveter.
It’s not an exaggeration to say that without thousands of Rosies, the war would have dragged on for years longer than it did. The women had no experience, but they were motivated to get the job done—and they did.
I had my own Rosie the Riveter experience in the late ’80s. While serving as VP of Finance for a midsize aerospace company, we were confronted with a crippling thirteen-week strike. At least it could have been crippling, but it wasn’t. Why? Because accountants, secretaries, engineers, buyers, vice-presidents, and even the lawyers all “went to the factory floor” to keep production going. Since they didn’t trust me with anything that moved or made noise, I was a wing wiper, meaning I took a rag, squirted Trike (trichloroethylene) on it, and cleaned excess adhesive, oil, dirt, and grime off of aluminum surfaces before they went to the paint shop. We were organized, inspired, and well led by our president, John Kleban. For thirteen weeks, our motley crew, by working hard with enthusiasm, kept the production lines moving and our customers satisfied. That is when the value of a hard hat for everyone was indelibly imprinted into my leadership DNA.

At 93 and still working, Elinor Otto is living my dream. I have always said, “I want to work as long as I can, and when I can’t, drop dead at my desk.” Today, my desk is in my home office and Dottie (my wife) will be the one who finds me. Of course, I am aware that I don’t get to prescribe my future, but as long as I can, I am going to stay on the assembly line of life, doing something useful in a way that honors God.

Elinor Otto reminds me of one my biblical heroes, Caleb, who, when 85 years old said:
I am still as strong today as I was in the day Moses sent me; as my strength was then, so my strength is now, for war and for going out and coming in. Now then, give me this hill country about which the Lord spoke on that day, for you heard on that day that Anakim were there, with great fortified cities; perhaps the Lord will be with me, and I will drive them out as the Lord has spoken. (Joshua 14 :11-12 NIV)

Eighty-five and taking on the Anakim giants. Ninety-three and still driving rivets. That is living life to the fullest. My bucket list can wait. I have all of eternity for it.

You can order a copy of 16 Stones at 16stonesbook.com or online at Amazon, B&N, etc.