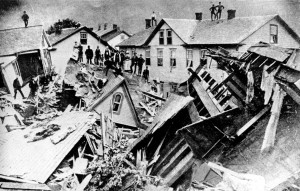 On May 31, 1889, at 3:10pm, the South Fork Dam collapsed, releasing nearly 5 billion gallons of water in 35-40 minutes into the Little Conemaugh River (about the same amount of water that flows over Niagara Falls). One hour later, a wall of water—60 feet high in some places—hit the town of Johnstown, Pennsylvania, devastating the town and sweeping more than 2200 people to their deaths. The courts ruled the disaster was an Act Of God, and the heavy rainfall certainly was. But it was decisions made by man that caused the dam to collapse; decisions that eliminated the margin of safety every dam—and every organization and person—needs when the pressure is rising.

At the South Fork dam, there were no discharge pipes. As the rain hammered down and the water continued to rise, there was nothing they could do but watch. Higher and higher the water rose until it reached the spillway. But the spillway was clogged and couldn’t do its job. In order to keep fish from escaping the lake, a screen had been put across the spillway. During the heavy rain, all kinds of debris had drifted down the lake, caught on the screen and clogged the spillway, making it nearly useless. No discharge pipes and a clogged spillway meant rising water putting higher and higher pressure on the dam. No margin. A recipe for disaster? Yes.

And it’s a recipe for disaster in your personal life and for your organization. Margin matters. When the pressure is on, you better have a way of lowering the level of the water. Make sure your discharge pipes are working and your spillways not clogged. If you let the pressure rise too much, sooner or later, you—or your organization—will collapse and the casualty list will be high.

But there is more to margin than just avoiding disasters. Brad Lomenick had this to say about margin in a 2013 blog:

Feeling the pressure today? Don’t ignore it. Do something about it! Do something to avoid disaster and to “create opportunities.”

Any reason you can’t start cleaning out your spillways today?