A Hard Hat For Everyone 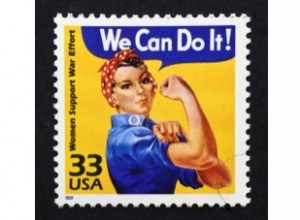 It is common today for women to work in heavy industry factories. They do all the things men do on assembly lines, in machine shops, in quality labs, and stockrooms. But that hasn’t always been the case. It started during World War II when the men were off fighting, and workers were needed to produce airplanes, tanks, rifles, jeeps, and bullets. Women stepped up and were immortalized in a hit song, “Rosie the Riveter”:

All the day long, whether rain or shine,
She’s part of the assembly line.
She’s making history, working for victory, Rosie the Riveter.

It’s not an exaggeration to say that without thousands of Rosies, the war would have dragged on for years longer than it did. The women had no experience, but they were motivated to get the job done—and they did.

I had my own Rosie the Riveter experience in the late ’80s. While serving as VP of Finance for a midsize aerospace company, we were confronted with a crippling thirteen-week strike. At least it could have been crippling, but it wasn’t. Why? Because accountants, secretaries, engineers, buyers, vice-presidents, and even the lawyers all “went to the factory floor” to keep production going.

Since they didn’t trust me with anything that moved or made noise, I was a wing wiper, meaning I took a rag, squirted Trike (trichloroethylene) on it, and cleaned excess adhesive, oil, dirt, and grime off of aluminum surfaces before they went to the paint shop. We were organized, inspired, and well led by our president, John Kleban. For thirteen weeks, our motley crew, by working hard with enthusiasm, kept the production lines moving and our customers satisfied. That is when the value of a hard hat for everyone was indelibly imprinted into my leadership DNA.

Is there someone in your organization who would love to put on a hard hat and get in the game? Take a chance and give them one—you may discover a Rosie!