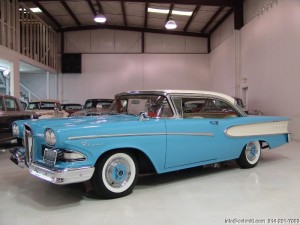 If anyone understands how to do a Big Reveal, it’s Apple. Steve Jobs started it and current CEO Tim Cook has kept it going. I’m not sure who is involved in planning the Apple rollouts, but they know what they are doing. The September 9 rollout of the iPhone 6 and iWatch was the most anticipated tech event of the year and it did not disappoint. And, iPhone 6 sales are booming world-wide.

Big Reveals have not always been so successful. Before the days of brand experts, event professionals, and “everything sends a message” consultants, rollouts were planned by a secretary in the marketing department or the CEO’s golf buddy. That is what Ford must have done when they rolled out the Edsel in August 1957.

After months of buildup and anticipation, Ford invited 250 auto industry reporters (and their wives) to the Edsel Big Reveal in Detroit. So what happened?

Now I am not saying that the Edsel was a failure because of these faux pas, but the reporters and wives must have been laughing all the way home. If Facebook and Twitter had existed then, the whole nation would have been laughing by midnight. (Okay, you can stop laughing now.)

What is the leadership lesson in this? The “everything sends a message” principle is correct. Details matter and it is easy to overlook faux pas. Get help and have more than one set of eyes looking at every detail. Make sure that one of the “one set of eyes” is someone who was not involved in the planning and has a critical eye—someone who loves to point out goof-ups.

If the best hotel in town was the Cadillac, what was the message?