Where Does The Buck Stop? 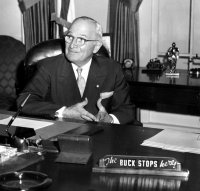 Harry Truman was famous for his The Buck Stops Here sign on his desk. Sadly, there aren’t many Harry-Truman-like leaders in today’s world.

The CEO of Volkswagen wasn’t—he claimed he didn’t know about the emission test cheating.

The CEO of Pilot isn’t—he claims he isn’t responsible for cheating customers out of their earned rebates. (I guess he takes no responsibility for the culture that permitted it.)

The CEO of Wells Fargo wasn’t—when false accounts were set up without customer knowledge or approval, he loudly testified: “That isn’t the Wells Fargo way of doing business!” (Really? Thousands of employees thought it was.)

A well-known basketball coach claimed he had no idea prostitutes were being used in his recruiting program.

Easy to get discouraged isn’t it?

But all is not lost. Among the hundreds (thousands?) of “I’m not responsible” cries out there, comes one “…ultimately that’s my responsibility” admission from Jason Fried the CEO of Basecamp (project/communication software).

How did he put his words into action? “This year I’ve decided to take Harry Truman’s famous The BUCK STOPS Here sign literally. So in 2017, all refunds requested by Basecamp customers will come out of my paycheck….” In other words, “I’m responsible so I’ll take the hit.” (Most of the others retired with #100M+ packages and are living happily ever after.)

Capitalism is under attack. Why? Because too many leaders claim “I’m not responsible….”

Have you noticed that politicians spend most of their time blaming the other party—or the media—telling the voters “I’m not responsible….”

Then…shaming them all…comes a Harry-Truman-like leader named Jason who says “…ultimately that’s my responsibility. The buck stops with me. I’m not going to pass it down.”

If you are a leader at any level, get a The BUCK STOPS Here sign, put it on your desk, then lead that way—quit passing the buck.