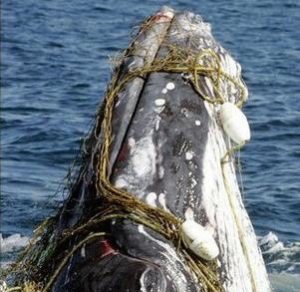 In 2005, a female humpback whale became entangled in the 240-foot-long lines of twelve crab pots, each weighing about 90 pounds. Eventually, the whale was going to lose its struggle to survive and drown. After a fisherman called for help, a four-man rescue team of divers arrived within an hour and began the dangerous hours-long task of cutting her free. According to the rescuers, after she was free, “she swam in what seemed like joyous circles…then came back to each and every diver, one at a time, and nudged them, pushed them gently around, she was thanking them.”

People can be entangled and weighed down by a lot of things that can tire them out and drown them. Jesus once said that the Pharisees “tie up heavy burdens and lay them on men’s shoulders”—speaking of religious rules that were man-made, not God given (Matthew 23:4).

It is not just in religion, it also happens in businesses, colleges, or governments—any organization that is composed of people.

Common crab-traps hung on people are:

Criticism (instead of encouragement)
A non-responsive bureaucracy
Outdated policies
Unclear expectations
Bosses (instead of leaders)
I know best; do it my way
_____?_____ (you fill in the blank)

What do crab-traps do? They make people crabby, sink morale, and lower productivity.

If you want to know what makes people feel entangled and weighed down, ask them.

If they won’t tell you, then you are the problem. You have created a culture that buries the truth.

Maybe—if you are lucky—one of your people will tell you the truth. It may hurt (it did me), but in the long run, it will be the best thing that ever happened to you.

By the way, like the whales, if you cut them free, they’ll thank you.

Thanks to my friend, Topper Long, who shared this story with me.