Vision Is The Easy Part 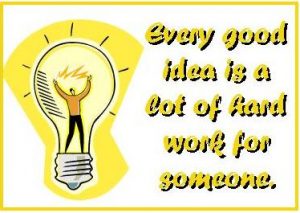 In 16 Stones, I concluded a review of the 1960’s moon-landing program with the following statement: “It wasn’t a Saturn rocket that launched Apollo 11, it was a vision.” President John Kennedy had cast the vision for “landing a man on the moon” on May 25, 1961. It was fulfilled eight years and fifty-six days later (July 20, 1969) when the Apollo 11 Lunar Module landed on the moon, announced by Astronaut Neil Armstrong’s historic statement, “The Eagle has landed.” Though President Kennedy deserves immense credit for casting the vision, the real story is what happened during the eight years and fifty-six days.

The cost of Neil Armstrong’s “…one small step for a man. One giant leap for mankind.” was $24B and three lives—the entire crew of Apollo 1 was killed in a cabin fire during a 1967 pre-launch test. More than 400,000 people from 20,000 companies and universities were involved in the project. There were thousands of tests, changes and retests in the systems and flight vehicles. There were the six Mercury and twelve Gemini/Titan launches, plus six unmanned Apollo launches and four manned non-lunar Apollo launches, all before Apollo 11. It is truly said that every good idea is a lot of hard work for someone.

There are a lot more visions unfulfilled than fulfilled. Why? Poor execution. In their best selling 2002 book, Execution, Larry Bossidy & Ram Charan made it painfully clear:

“…unless you translate big thoughts into concrete steps for action, they’re pointless.”

They go on to say:

“Many people regard execution as detail work that’s beneath the dignity of a…leader.
That’s wrong. To the contrary, it’s the leader’s most important job.”

The leader’s most important job? Yes, and Warren Bennis agrees:

“Leadership is the capacity to translate vision into reality.”

I love these quotes because as a non-visionary, I admit I’m more than a bit biased toward action. Without action, the “next big thing” soon becomes the “last abandoned thing.” So don’t fall into the trap of believing that just because you may be great at casting vision, you are a great leader. Great leaders may or may not be good at casting vision. However, they will always be great at getting things done. Leaders are remembered for great accomplishment, not great dreams.

If your organization is floundering and you’ve cast vision until your vocal cords are worn out, it’s time to for you to focus on execution—“…the leader’s most important job.”

By the way, Execution should be on your required reading list if you are leader, think you are a leader, or want to be a leader.

[You can order 16 Stones at hard-lessons.com.]