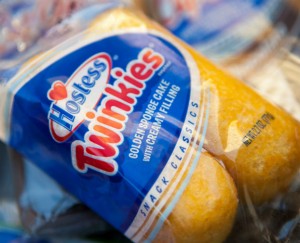 Twinkies are back—from the dead! After shuttering all their bakeries and laying off thousands of employees in 2012, the golden, cream-filled, 150 calorie, spongy cakes are back on the shelves at more places than ever. I call it the Twinkie Resurrection, but Twinkie Revolution might be a better description.

Today’s Twinkies are made by $20 million robotic Auto-Bake systems run by 500 people instead of 9000 before the revolution. Result: lower costs.

The new Twinkie has a shelf life of 65 days—up from 25 for the old Twinkie. What difference does that make? Delivery costs have been cut in half, enabling the number of Twinkie retail outlets to be more than doubled. Result: higher sales in more markets.

The bakeries have been modernized and airflow has been improved for the benefit of the workers during the hot summer months. So much for management not caring. Result: better working conditions.

Production, inventory and logistics are now managed by a new SAP software system. Results: current and accurate information in the hands of the decision makers.

What is the bottom line? Cash flow is running more than 75% ahead of the forecast, prompting a decision to use the same approach to reopen the Hostess CupCake lines. Result: more jobs, more sales, more profit, and more happy customers.

The Twinkie Resurrection Story is a classic case of new leadership with a new vision, giving new life and new hope to a dead organization—really dead in the Twinkie case. If your organization (business, church, college, or whatever) is dead or dying, tweaking will not be enough. You need a resurrection strategy. Is it possible? Drive to your closest convenience store and buy a Twinkie for inspiration. Then, remember if you’re the leader, it’s up to you!

[Read The Twinkie Miracle from the May 4th edition of Forbes for the full story.]

Stock Up On "Twinkies"

If you love those golden, cream-filled, 150 calorie, spongy cakes called Twinkies, you better stock up. Hostess Brands—the maker of Twinkies—is in their second round of Chapter 11 bankruptcy. The first round was in 2004-2009; this round was filed in January 2012. Are they going to make it? Maybe. They have asked their workforce for $200M in cost savings in wages, healthcare and pensions. We’ll know by the end of September if the workers accept the company’s ultimatum. (They have little choice if they want to keep their jobs.) But even these cost reductions may not be enough to save Twinkies in the long run.

How did they get in this mess? By years of lousy leadership—company and union. There is no other way a $2.5B company could end up with:

●  twelve different unions
●  40 separate pension plans
●  36 plants●  six different CEOs in the last ten years
●  more debt when they exited bankruptcy in 2009 than when they entered in 2004 (I thought the purpose of bankruptcy is to reduce debt.)
●  work rules that require different drivers to deliver different Hostess products to the same retail location
●  sales sinking at a 10% rate
●  losses exceeding $300M per year and escalating
●  debt of almost $1T though hundreds of millions have been written off

(All the sordid details are in an article by David Kaplan in the 8/13/2012 edition of Fortune magazine.)

The company blames the “Atkins” diet (low carb means no Twinkies), the economy and the unions. The union blames management and those overpaid executives. The truth is, Hostess got where it is by what I call “cumulative effect consequences.” Hostess is suffering from hundreds of decisions made over decades that have the cumulative effect of destroying—or nearly so—the company. That is why no decision is inconsequential. In the long run, they add up. A questionable acquisition here, a labor agreement concession there, a self-centered CEO for a few years, slow response to changes in the economy or customer preferences, and before you know it, Chapter 11 bankruptcy is staring you in the face.

“Cumulative effect consequences” are a real part of life. One cheeseburger per week is probably okay. But add in a milkshake per week, a sugar-filled energy drink…or two…or three, a “loaded” baked potato, a couple of beers on Saturday afternoon, your “one vice”—a Twinkie every day, and before you know it, your health is threatened by obesity, high blood pressure, diabetes, or worse.

“Cumulative effect consequences” are how we get in financial trouble. A car payment we can afford, a house we can’t, the vacation of a lifetime, the iPad we put on MasterCard, and before you know it….

In life and in leadership, every decision is important, even the “little ones,” because at some point, they all add up. So take care. In the long run, a number of “no big deal” decisions can become a very big deal.