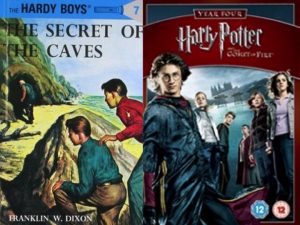 My youngest grandson, Seth, was at our place last night doing his homework: reading a book, The City Of Ember. According to Amazon: “The city of Ember was built as a last refuge for the human race.” But, woe is me, the lights in Ember are flickering so an “ancient message” must be found that will the save the city and the entire human race.

When I was Seth’s age (a long time ago), my favorite reading was the Hardy Boys: two brothers who “sleuthed around” catching the town burglar. Not exactly “save the human race” kind of stuff. A few years back, I was sure that my oldest grandson, Aaron, would love the Hardy Boys so I bought him one book which a couple of weeks later I found discarded—unread—under his bed. However, put a Harry Potter book in front of him, he won’t put it down until finished. So, Harry Potter, Lord Voldemort and Draco Malfoy win out (450M copies in 20 years) over Frank and Joe, the teenage-amateur detectives from Bayport. Imagine that. What is this world coming to?

One of the major challenges—especially if you are my age—of 21st century life and leadership is letting go of the 20th century. Everything has changed: culture, technology, values, preferences, demographics, social media and so on. Even if you don’t like some of these changes, you better understand them and know how they will affect your life, business, church, community and family. Otherwise, like the Hardy Boys, you may wind up discarded under the bed.

What are you having a hard time letting go of? Let me know in the comments section.