Does It Matter Which One? 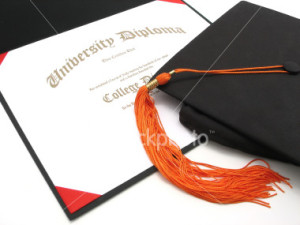 I saw the ad on TV last week: Get a college degree and you’ll make twice as much as a high-school-only grad. I cringe every time I hear that because there is a lot more to the story than just getting a college degree.There are a lot of reasons people go to college—some are good reasons, some are not:
– Because your friends are going, you’ll have a good time, and a get a degree in something—a lousy reason to go.
– Because your parents want you to go—better, but not great.
– Because you want an broad-based education that will help you understand the world we live in—a good reason.
– Because you have a specific career you want to pursue (nursing, accounting, teaching, etc.)—a really good and necessary reason.
– Because you want to make twice as much money as high-school-only grads. You will probably need a college degree, but it matters a lot which degree because not any ol’ degree will do.

Thousands of people of all ages have tromped off to college, run up thousands of dollars of debt—which they are now drowning in—and are either under-employed or unemployed. The twice as much paradigm didn’t work for many of them.

What has happened? Driven by technology, globalization, and so on, the economic world has changed! You may not like the change, but it is a permanent fact of life. As a result, education is still an important factor in future income but you won’t make twice as much unless your degree is in demand, and what is in demand has changed a lot in the last ten to twenty years.

Some relevant facts from various sources are:

So, what is the point of this?

Go to college? Yes. But do it for the right reasons, the right way, and with realistic expectations.

If this post was interesting and useful, please forward it to a friend—especially one who is considering college.