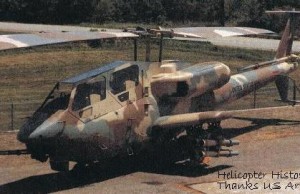 My first encounter with Lloyd Shoppa was coaching 5th and 6th grade boys in basketball. My team was the Red Raiders. I don’t remember the name of Lloyd’s team, but I remember they wore black uniforms and beat our brains out. He was a good coach. He was also a good production control director at Bell Helicopter where we both worked.

My second encounter with Lloyd came soon after I escaped the engineering bullpen and was promoted (my first promotion) to project engineer on the Advanced Attack Helicopter project team. I thought I was special, and for sure I thought our project was special because the company president had anointed it as the company’s highest priority. To make sure everyone knew, we printed AAH #1 stickers and put them everywhere; not a popular move with the other project teams.

It takes about three zillion parts to make a helicopter. Making sure each part is available when needed is a huge and critical task because a shortage can shut down an assembly line. Not cool. One of my daily tasks was to attend a part shortage meeting—chaired by Lloyd. All the part shortages on all the different projects were discussed. After attending a couple of meetings, I decided that the AAH project was not getting the attention it deserved. After all, we were #1. Being young and foolish (older now, but still foolish), I decided it was my responsibility to remind everyone that according to our company president, the AAH was our #1 priority and should be treated as such in the meetings. It got very quiet in the room. My little speech was about as popular as the stickers we had plastered all over the company.

Lloyd, without raising his voice, looked at me and said, “Dick, in this room, everything is #1.” In that one simple statement, Lloyd sent a message to everyone in the room, especially to me. He brought me down a bit, and lifted everyone else a bit. Something I needed and something they needed.

That was about forty years ago, but it was a lesson I have never forgotten. Rankings may be fine for NCAA football, but when it comes to people, customers, project teams, etc., a Level 5 leader is going to make everyone feel like they are #1. If you want and need #1 commitment and performance from people, don’t ever tell them they are #2. They may believe you and act like it.

(By the way, Lloyd finished his long successful career at Bell as the company president.)