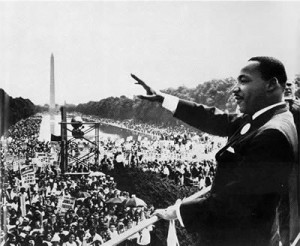 When we celebrate July 4th, blacks join in, but they remember they were still slaves in 1776. When we celebrate Washington’s birthday, blacks join in, but they remember that he owned slaves. To African Americans, it is Lincoln and MLK, Jr., who led the fight, first for freedom, and then for equality. These two stand alone in black history; there are no rivals to their legacy. They both led with:

The lives of millions were impacted for good by their leadership. Both died young, brought down by an assassin’s bullet. They believed that…

“The quality, not the longevity, of one’s life is what is important.”
Martin Luther King, Jr.

Most of us will not have the opportunity to impact millions by our leadership. However, all of us can impact a few, some hundreds, and some thousands. Whatever the size of your sphere of influence, if you want to make a difference, you will have to lead with purpose, courage, vision, resolve and selflessness. Do that and you will leave footprints that endure long after you are gone. Isn’t that what is really important?