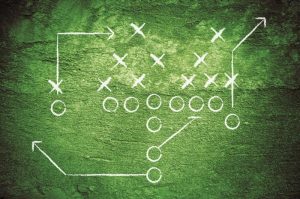 With only three returning starters, and sophomores playing leading roles, they started 1-5…and some of those losses were really bad. Most teams would have given up and started thinking about next year. They didn’t.

The season was more than half over when they went on 6-1 run which put them in the final four for the state championship. During the 6-1 streak, they beat two teams they had lost to earlier. They lost in the final minutes to an 11-2 team on its home field. What a turn-around!

This story is more about the coach—the leader—than the players. Turnarounds are always about the leader. Teams, churches, businesses, schools, or nations don’t just turnaround on their own—someone leads them. If you are a leader in your organization, it’s your job. And it’s your job today! Don’t fall into the trap of “if I just had better players….” Yes, get better players, but don’t wait for that, make the players you have now better—coach ‘em up.

Some thoughts about coach ‘em up:

Is your organization in a 1-5 slump? Maybe you do need some better players, but in the meantime, coach up the ones you have. That’s what leaders do!

And if you can’t do it, the only solution is to coach yourself up or get a better leader.